no time
no time
!!!!!!!!!!
I have only 7 days
I have just been awarded an artists residency with the MIRA foundation in Puglia Italy ...
my first artists residency .... ever....
The residency starts in October and ends at the end of November
It is a bit of a scramble as I am finding sponsors and arts grants need alot of time to answer
(like 6 months at least)...I suddenly need film flights processing publishing printing framing bookbinding PR publicity rental car excess baggage for equipment ..... DRAMA!
The images I will make will be very elegant and strong ... my project is to photograph the ancient and protected Olive trees that are 1000s of years old in the Puglia area ... they are so old they seem to have human bodies threaded and woven into the trunks. 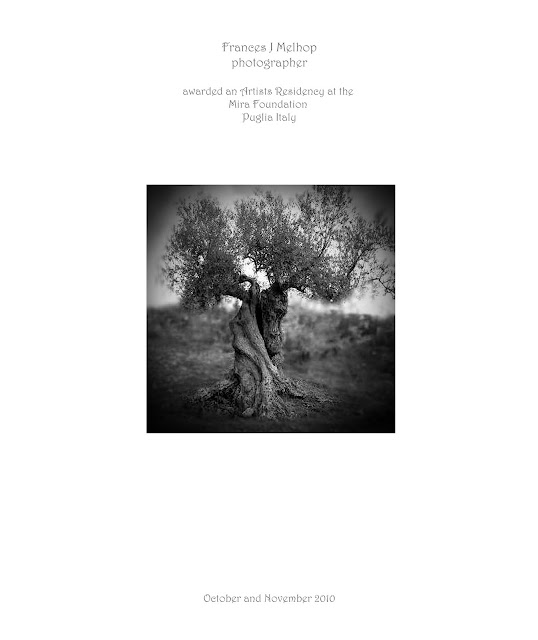 This is to be a series of portraits of ancient olive trees , employing one of the earliest and simplest modes of making a photograph, the pinhole camera, the kodak box brownie and the monorail camera (head under the dark cloth ) film and analogue processsing...
After years making commissioned work which has become increasingly technical and effect-laden, I am now attracted to the opposite.
I then want to mount an exhibition of these images at almost life size, (this will be held first at the Pallazzo Palmieri and will then travel internationally).
From these images we will publish a book .........the exhibition itself will feel like walking through a giant old ancient olive grove .... a disappearing culture revering age and oldness as beauty.
As always the dark resonance of fairytales runs through my work. To me, fairytales are themselves like the photographic medium. They create an imaginary world which oversteps the literal, where the impossible becomes possible.
***********************************
its a bit crazy but ....
in an effort to rapidly raise funds for my project I am offering a 2 for the price of one on any images of equivalent value from the Matchstickgirl gallery including the original 8x10" one off polaroids ...and limited edition works.
buy one and choose another that is the same or equivalent value
at no extra cost.
This will be for 7 days from the date and time of this blog posting ...saturday september 18 2010 22:00 hours until sunday 26 september 2010 22:00 hours.
Posted by matchstickgirl at 3:13 AM

wowee, congrats on the artist residence - what an awesome idea with the Olive trees! It's going to look absolutely fabulous - like all your work! Good luck, Frances. Yay, back to Europe too! :)

We will all keep our fingers crossed for you that you'll collect the money!
I'll do my best when I have some money again on Paypal :)

Congrats to the award!
Everything crossed for a miracle!
Shared it on Twitter/Facebook.
A pity you don't have their widgets here to make it easier for the visitors of your blog ...

Weeeee! Congrats, Frances, how wonderful. I'm so happy for you, this is a great project. Good luck, you'll be ok!!

wow what an adventure!!I hope you will get/ find/ raise enoug money for this stunning project!

Congrats!! And good luck! I used Petits post to spread the word. Hope it works! :)

Sounds so great, love the subject. Best of luck!

Congrats on the artist residence !

Many congratulations! I took an arts residency in Italy a few years ago and it was the best thing I've done for my work.

Remember that you can write off expenses....
Buona fortuna!!

I had commented here, did it dissapear in cyberspace?
I'm having everything crossable crossed!!!

I love the olive trees and the way you will be depicting them!
Money has to come through, these trees need to be preserved in art for ever !!

Congrats on the residency and best of luck in raising the funds! Really hoping you make it!

Don't know if your project fits in, but this website may be useful for you:
http://www.kickstarter.com/
Good luck!